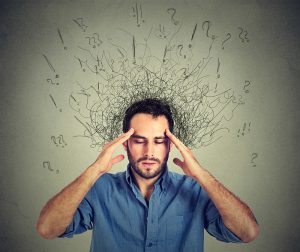 No, getting a little bit of an eye twitch whenever you see a speck of dirt on someone else’s monitor does not equate to OCD. Whether through pop culture, stigma, general misunderstandings or some other method, society has come to jokingly accept being obsessive compulsive as a label for neatness, and attention to detail.

OCD is a debilitating, at times incapacitating and often truly terrifying mental disorder that encompasses a list of characteristics that goes beyond a few affable or eccentric traits.

We here at Vantage Point understand one thing – when people come to us seeking help for their OCD, we know how serious the issue can be. Being obsessive and compulsive doesn’t mean finding oneself in a cycle of enjoyable or perhaps just slightly strange tasks. Being obsessive and compulsive means facing an inescapable loop of unwanted, unpleasant and uninvited misery.

What OCD really is

OCD isn’t just about repeating certain actions. It’s about mental obsessions with concepts, people, or events, which trigger or were triggered by compulsions, within a cycle repeated ad infinitum. It’s about paranoia, disturbing thoughts, and troubling mental imagery.

Like most mental disorders, there is no singular culprit – no one issue society can unify behind in the fight against OCD, except maybe the stigma surrounding people who suffer from it. OCD may occur due to environmental factors, events during child development, genetics, or even trauma.

In the end, the most important thing is this: you can live a fulfilling life while dealing with an obsessive compulsive diagnosis.

In pop culture, OCD is rather clear-cut and well-defined by characteristic stereotypes – but in real life, OCD is often much more subtle, and looks different from person to person. However, there are general symptoms that are often present in OCD cases. Common symptoms include:

A lot of these symptoms translate into certain subtypes and kinds of OCD, but they can each or all be present in a case of obsessive compulsive disorder.

Yeah, it’s scary – and worse yet, OCD doesn’t just come alone. At times, it may be the result of lasting PTSD, or it can develop into other serious idiosyncrasies and disorders such as kleptomania, ADHD, and addiction. But no matter how bad it gets – no matter how far your disorder has gone – there’s always hope and viable ways to getting better. It may take months or years, but you’ll get there.

Like other disorders, therapy is a common tool for the treatment of OCD. But it isn’t the only tool. Each case is different, so it’s impossible to draw up the perfect plan or suggest the right set of treatment options for every individual – but here are a few treatments you can expect to see or try out:

The key isn’t in shoving as much of everything into your life as possible – it’s in trying every shoe until you find one that fits just right. That’s what we at Vantage Point excel in – helping you find that treatment path that best fits your needs, your circumstances, and your life in general.

Your OCD, PTSD, anxiety, depression or other disorder should never spell the end of a fulfilling life – even if it will never be perfect, or “normal”. Let’s be honest though: who wants a bland, “normal” life, anyways?

Hoarding isn’t when someone has a closet or a drawer full of old letters or pet collars or other memorabilia, or from collectors who amass a vast number of games, movies, toys, models or other collector’s items, and display these in a single and distinct space – hoarding is when nearly nothing is ever discarded, turning homes into storage bunkers of an unreasonable amount of stuff.

Hoarding manifests itself in the form of a disruptive compulsion to collect, store, and hold countless items, often in disarray, and often creating conditions of squalor, through the accumulation of immeasurable amounts of dirt and dust between the clutter that often occupies every existing surface in a hoarder’s home. Besides the actual hoarding, other symptoms include:

Unlike the typical image of an OCD sufferer being a total neat freak, this type of OCD most definitely has nothing to do with sanitation, hygiene or neatness.

There’s nothing remotely simple about a hoarding disorder, or the way it should be treated – but it is completely treatable. Drugs and medications may help alleviate some of the symptoms of hoarding – including depression and anxiety – but they’re a temporary solution. Long-term therapy, group therapy and other treatment options are necessary, such as:

Not all of these may be effective, and some may be used to greater effect than others, but ultimately the exact treatment plan for a case of hoarding disorder depends entirely on the individual and their circumstances. We at Vantage Point focus on that: the unique, individual nature of your case.

There’s a point where keeping things extremely clean is no longer just a character trait, but the symptom of a full-blown mental illness.

For contamination or washing OCD, that mark is hit when your obsession and compulsive behavior crosses over into the realm of uncontrollability, and affects your life negatively, causing you to exaggerate unfairly characterize things as dirty when they’re entirely sanitary, and generally making you incapable of concentrating on anything other than your obsession towards total cleanliness, and your accompanying washing compulsions.

There’s obviously nothing wrong with wanting to be clean or wanting things to be in order – and neat freaks are typically just eccentric, and not mentally ill. But as with anything, there are limits to what counts as eccentric, and what counts as a problem. Here are a few symptoms associated with real washing OCD:

On the surface, onlookers might see a simple or eccentric quirk – to family members and loved ones, this type of OCD is a corrosive mental disorder that eats into a person’s ability to decide anything for themselves, instead of trapping them in inescapable patterns of washing and obsessive cleanliness.

How Washing Disorders are Treated

Like many other types of OCD, the primary treatment for compulsive washing disorders is therapy. There is no magic pill and no real 12-step program: it’s hard work and long months’ worth of therapeutic progress that counts towards solving the problem.

That being said, therapy itself isn’t easily defined. Common types of therapy used to help fight washing OCD include:

Medication also plays a role, in reducing the impact symptoms have on someone’s life, in order to help them move past their disorder – slowly, but in time. Vantage Point specializes in employing the type of therapy that works best for you.

OCD isn’t a pest or a scary label. It’s a real condition that occurs often outside of our control, and can’t be cured or removed from a person’s brain. But it can be treated, coped with, and lived with – even within the case of a pervasive invasion of your thoughts, as in pure obsessive OCD.

OCD is usually a collection of obsessions (fears) and compulsions (coping mechanisms) that feed into each other in an infinite, seemingly inescapable loop that robs your life of much of what made it enjoyable.

But obsessive OCD takes things in a different and specific direction with the obsessions and is characterized by intrusive thoughts that you cannot help but think, even when there’s no reason to think of them. It’s characterized by its obsessions, which are usually violent, and involve the sudden image or thought of violently hurting or ending someone’s life. Symptoms include:

No one can really say why these thoughts manifest – and many of us have intrusive thoughts from time to time – but suffering from pure obsessive OCD means having these thoughts over and over again, always without your consent.

Treatment for pure obsession will never magically make you a perpetually happy individual. Which, frankly, no one should be. Seeking to be happy and positive at all times only robs us of the true beauty that comes from being sad, getting angry and expressing our emotions when they have the right to be expressed. But OCD can be dealt with and coped with, even in its obsessive form, through:

Yes, OCD is terrible – but the key isn’t to unrealistically rewire your brain and delete the OCD, it’s to give you back your life. This is especially true in obsessive disorders, where there is no guarantee that your intrusive thoughts will ever completely end. However, you can drastically lessen the impact they have on their life, make light of them, and ensure they never translate into compulsive action.

You are not your disorder – and your disorder isn’t a spell of doom for your life. You can proudly bear the burden of an OCD diagnosis, yet still utilize treatment techniques to live a fulfilling life, with all the ups and downs, challenges and joys, difficulties and victories that describe a life well lived.HARM

In every case of OCD, the obsession a person develops is wholly negative, disruptive, and often destructive to normal life. The compulsions formed around that obsession is seen as a coping mechanism, a selection of internalized rituals that help you basically get some stress relief, and forget about the anxiety. But harm OCD is an entirely different kind of obsessive compulsive disorder, characterized by the fear of both being harmed, or losing control and harming others.

What Harm and OCD Means

Now, it’s sort of unfair to say that one type of OCD is more harmful than the other, but the definition of harm OCD here has more to do with the association of causing others harm from the sufferer’s perspective, versus the actual harm being caused in reality.

OCD manifests itself in painful and disruptive ways every single time, no matter whether that manifestation depends on you seeing yourself as a psychopath, or you hoarding tons of trash within your own home. Harm OCD symptoms include:

These fears are usually accompanied by compulsions based around checking if you’ve harmed anyone, and compulsively removing yourself from any opportunities to commit harm, including compulsively checking your bag, purse or pockets for objects with which to hurt others.

The association with harm – violence, in particular – and the compulsion of checking for signs that you’ve hurt someone is what sets harm OCD apart from a case of pure obsession.

Treating this Brand of OCD

While severe, harm OCD can be treated. The method in which it will be overcome is different for everyone – you might find that what worked for you won’t in other people. Common techniques include:

It’s important for us to tell you this much: you’ll never be “normal”. You’ll never be perpetually happy. You’ll never find perfect peace. But guess what: so will no one else. Normality is a construct – so long as you’re happy with who you are, and can function as a member of your family, a friend to your friends, and a partner to your loved one, what other people see as normal behavior is purely subjective.