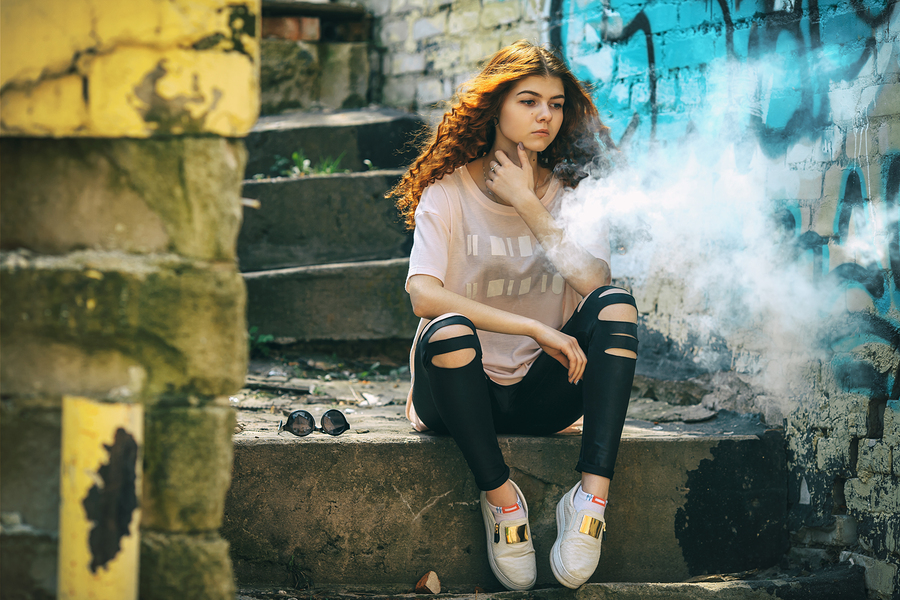 Although vaping has been a trend widely considered as a better and less toxic alternative to cigarettes, the dangers of nicotine are still a problem particularly for young people. Cigarette smoking rates have been dropping dramatically over the past few decades but teens have become more interested in the use of electronic cigarettes or vaping instead. Unfortunately many people are not aware of the dangers of this type of product and more teens than ever are becoming addicted.

E-cigarettes have been touted as being useful for adults to quit smoking cigarettes, but all too often kids get hooked on vaping. With different flavors available including fruity and candy flavored options it is not surprising that teens can see the appeal of e-cigarettes. The trend has raised concerns about the possibility of young people becoming addicted to nicotine and experience the various health risks associated with vaping.

Most people are familiar with the dangers of tobacco use and cigarette smoking but vaping is a relatively new technology that has changed the world of nicotine use. People who are already addicted to cigarettes might switch to vaping and experience some health benefits but others with no smoking experience might begin vaping because of the flavor. No matter what the reason, vaping still contains a substantial dose of nicotine which is known to lead to addiction.

Because vaping involves puffing on vaporized liquid nicotine rather than inhaling burned tobacco, many believe it to be a healthier alternative to smoking cigarettes. There are less of the toxic chemicals in vaporized nicotine such as cadmium and beryllium which typically accumulate in the tobacco plant. Although it may be somewhat helpful for adults attempting to find a healthier choice or quit cigarette smoking, vaping in itself is by no means harmless.

One of the popular vaping products among teens is the JUUL which is a flash-drive shaped system that contains about the same amount of nicotine as an entire pack of cigarettes. With such a high concentration of nicotine, researchers are worried about the impact it could have on users. With more teens using this product, there could be a dramatic increase in the rates of addiction in the younger population.

Last year about 30 percent of high school teens said that they used e-cigarettes and even 10 percent of eighth graders said that they used them as well. Researchers have found some worrisome health concerns for young users of e-cigarettes who have complained of issues such as bleeding mouths and throats due to the way the vapors inflame mouth cells. Studies also found that vaping can make it harder for lung cells to repair damage and can increase the risk of a heart attack.

Most teens who get involved in vaping are under the impression that because e-cigarettes don’t contain tobacco that they are not dangerous. Vaping can affect the immune system and even cause smoker’s cough in spite of the lack of tobacco. Most people simply see vaping as harmless and a better version of smoking cigarettes.

Most teens are attracted to vaping because it seems novel and high tech and not as risky as other types of drugs. This is partially because e-cigarette ads market the products as safer and teens are likely to see these ads. There is also much less of a public health campaign against e-cigarettes as there is for tobacco.

Teens tend to have a limited understanding of what vaping really is and see it as harmless. They believe that vaping is just water or vapor without really knowing that there are harmful ingredients involved. They understand that it is less harmful than smoking and that is enough for them to feel okay about using e-cigarettes regularly.

E-cigarettes work by using a coil to heat up a liquid that produces an aerosol vapor. They contain chemicals that are less toxic than tobacco but if the product temperature gets too high then those compounds can start to decompose and generate more dangerous chemicals like formaldehyde. Teens might overheat the product to get a bigger hit but end up inhaling more toxic chemicals than they realize.

Studies have shown that teens using e-cigarettes tend to have higher rates of asthma due to the chemicals they are inhaling. The vapor triggers an inflammatory response in the lungs that is similar to smoking cigarettes. These effects combined with the tendency for teens to become addicted to the concentration of nicotine make e-cigarettes a dangerous choice.

With appealing flavors and marketing that suggests they are harmless, e-cigarettes are an attractive choice for teens. However, inhaling the vaporized chemicals can cause health issues that most people are not familiar with. It is important to raise more awareness about the risks of vaping and prevent teens from becoming addicted.