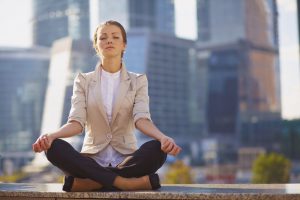 Mindfulness is the ability for a person to be present to the experiences that are going around within and around them. As someone develops more and more awareness, he or she has greater ability to recognize negative patterns, thoughts, and beliefs, and as a result, has a greater ability to make changes in one’s life. Essentially, the underlying principle that guides Mindfulness Therapy is that the more self-aware one becomes, the more successful he or she can become in achieving and maintaining relief and recovery. This is true for any form of recovery, such as from mental illness or from addiction. By becoming more and more aware, one has the ability to make choices that are healthier and more life-affirming.

Cognitive Behavioral Therapy (CBT) is a therapy that invites a conscious exploration of the types of thoughts one has as well as the associated feelings and behaviors. The point of CBT is to assist someone in identifying their negative thinking patterns so that he or she might be able to change them and replace their thoughts with positive ones. This therapy has been incredibly successful in treating many forms of psychological illness. In fact, because of its effectiveness, it is known as an evidence-based practice to be used by clinicians and other mental health providers.

As mentioned above, Mindfulness Therapy is a combination of CBT and mindfulness. It is a therapeutic technique that enhances one’s exploration of thoughts, feelings, and behaviors by inviting them to become more and more aware through the use of mindfulness. Mindfulness Therapy can be used in a wide variety of circumstances to assist someone in changing the way they react to their inner and outer triggers. For instance, it’s very common for a person with an Anxiety Disorder to be triggered by a certain thought. That thought can then lead to more anxiety, which can in turn stimulate more negative thinking and fear. A cycle of negative thinking might begin and cause a person feel overwhelmed by their inner experiences. However, with Mindfulness Therapy, a person might be aware enough to identify the original thought of anxiety and not believe it. He or she might have enough awareness to choose not to inwardly react to that thought. This could prevent an entire downward cycle of anxiety and fear. In fact, the mindfulness practices taught in Mindfulness Therapy have been shown to activate the prefrontal cortex of the brain, which is associated with emotional regulation and self-control. The goal of Mindfulness Therapy is to facilitate greater self-awareness in a person so that he or she can avoid subsequent thoughts, feelings, and behaviors that might cause further emotional pain.

If you or someone you know is suffering from a psychological illness, Cognitive Behavioral Therapy and Mindfulness Therapy might be a great option for treatment.